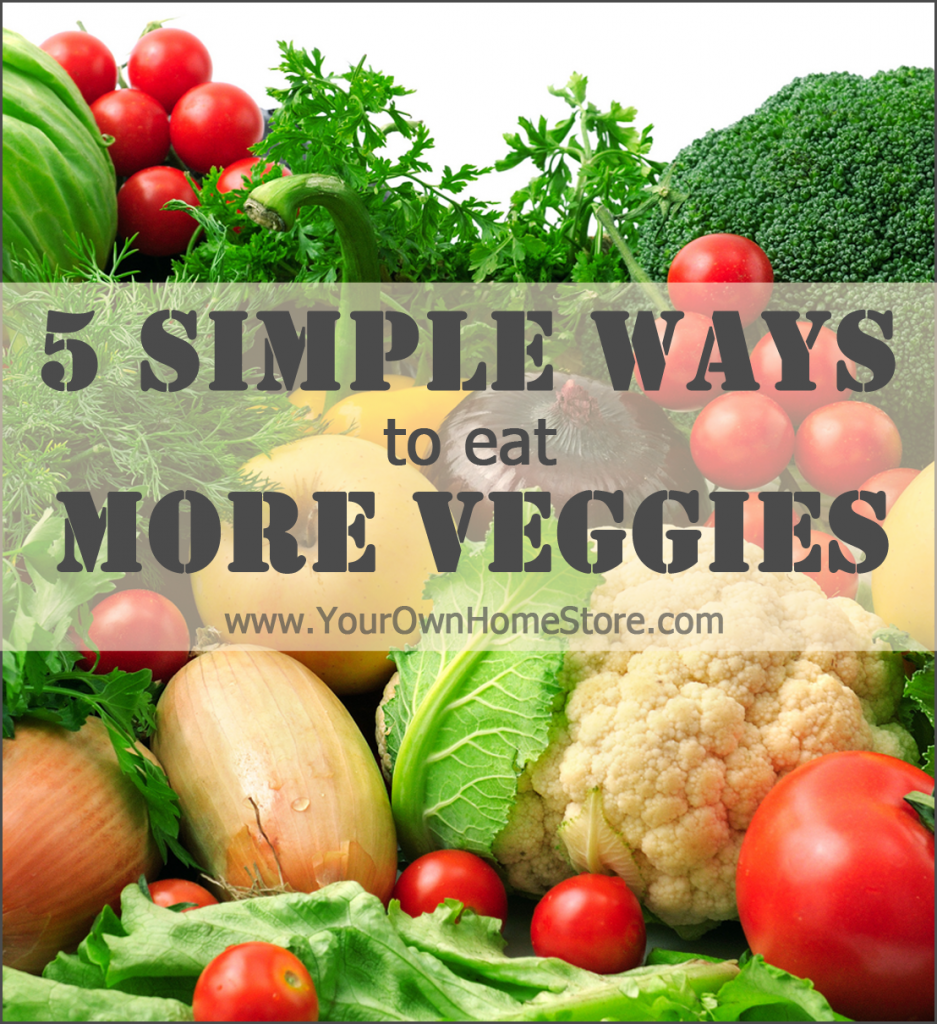 We’ve been trying to eat a bit healthier around this house.  I need more energy and I’m realizing more and more, that the energy that comes out of my body is based heavily on the quality of energy I put into my body.  That seems pretty obvious, right?  But it is so easy to rationalize away while I skip lunch so I can work or snack on sugary treats.

But I got a bit of a wake up call from my 7 year old the other day.    We had just finished enjoying a incredible barbeque with some friends.  It wasn’t processed restaurant food, but amazing, heavenly, home cooked food.  Our entire family ate it and enjoyed it.  We played for a bit and after a few hours told the kids it was time to go home.  One of my twin boys says: “What?!?  Why aren’t we going to eat out?”  I said “Well, we just had a huge delicious lunch.”  His reply was a HUGE slap in the face.  He said:

“Yeah, but that was real food.  I want fast food!”

Ouch!  I decided we had some changes to make!  I promised him then and there that we would not be eating out at all for the next month (at least).  But secretly,  I was a bit overwhelmed.  Then, as if in answer to my silent prayer, I  found a site called “Don’t Waste the Crumbs“ that I am loving.  Tiffany is all about eating healthy real food on a realistic budget.  It is all I can do not to stay up every night devouring her site.  She has so much to give and teach.  I love her philosophy.  She doesn’t promote overnight change, but instead teaches that simple changes, one at a time are most effective.

One simple thing I’ve started recently is eating more real vegetables.  And I’ve learned (as is the theme of this site) that being organized and prepared makes it so much easier to actually get those veggies in mine and my children’s mouths!  Here are five ideas that have helped us eat more veggies!

I’ve started allowing my kids to choose both the veggies we buy at the store and then what we have for dinner each night.  But there is a catch!  If they choose it, they have to promise to try it!  This has made eating more veggies much more fun!  We’ve recently tried purple carrots, cabbage, and even eggplant simply because the kids thought they looked good at the store.

Involving my kids in this way also forces me to be a bit more committed.  When I go shopping alone and choose the veggies all by myself, I often bring them home and forget about them.  They go bad and we never get the benefit of eating all that healthy stuff we just bought!  But when my kids are involved, they don’t let me forget!  They are always asking: “Mom, when are we going to try that _________ I picked at the grocery store?”  They are encouraging me to eat more veggies.  It’s great!

#2: Make veggies the snack of choice 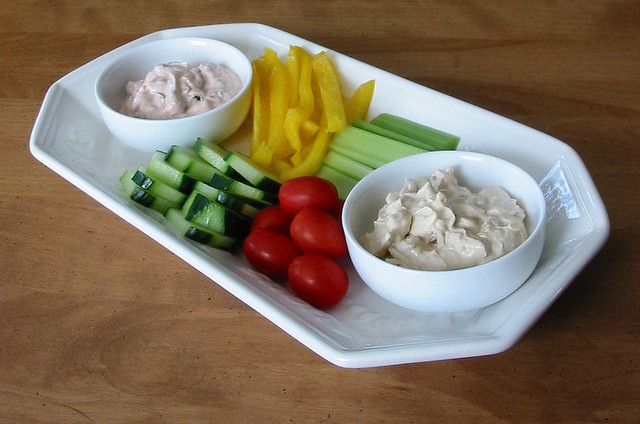 My kids love to snack and sometimes it can be tough coming up with a new snack every day.  The last few weeks, I’ve started putting out a veggie tray (mostly veggies from our garden.  YAY!) between 1:30 – 3:30 in the afternoon.  It just sits in the kitchen.  The kids can come snack anytime they want during those two hours, but the only snacks available are vegetables.  This means that 100% of their snacks are veggies!!! Which means……they eat more veggies.  Wahoo!

Plus, I’m snacking on them too!  I’ve never been a huge snack eater and in the past I haven’t really eaten the snacks I’ve made for my kids.  But I do now!  It’s like the hours after Thanksgiving dinner….there is food just sitting there on the counter, so I eat it!  But the big difference is that veggies are actually healthy!  Yay! 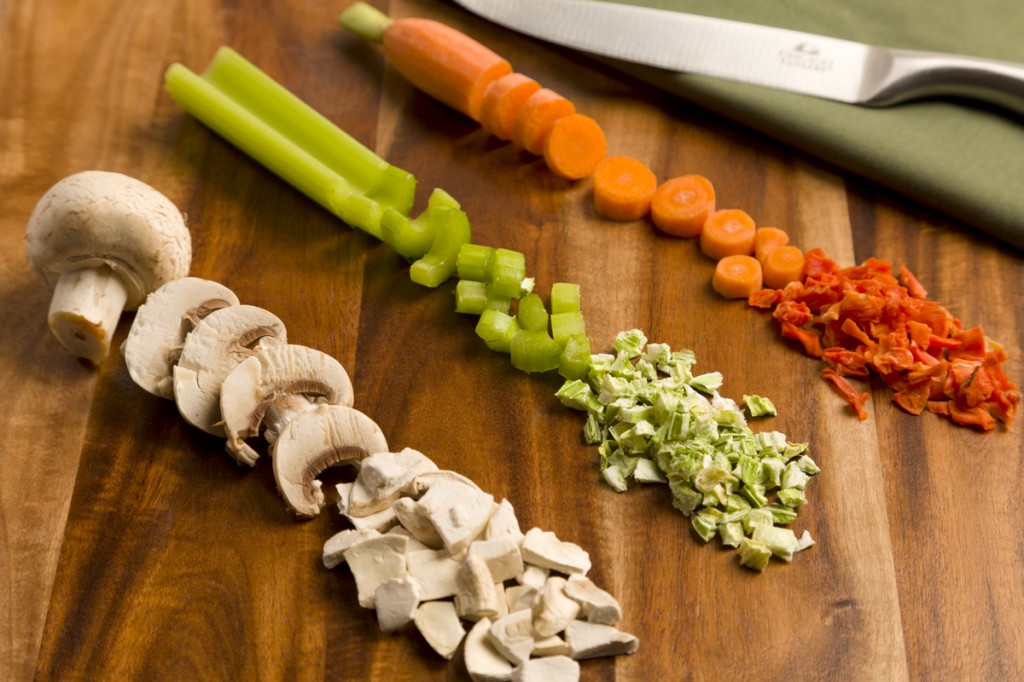 There are lots of reasons I’ve struggled with eating my veggies, but two stand out:  (1) They go bad before I can get to them, and (2) they take time to cook and prepare in a tasty way.  So…I talk myself out of doing it.

I often overestimate how much we will eat and buy too much.  Or, the grocery store makes me buy more of a veggie than I really need (like celery).  Once I start making dinner, I’m tired.  I don’t want to wash, peel, chop and cook the veggies I bought in addition to getting the main dish on the table.

For me, freeze dried veggies have really helped overcome those two issues and eat more veggies!  They are just as healthy (if not healthier) than the produce I’m buying at the grocery store, but they don’t go bad as quickly and take far less prep time!  They can be eaten dry (and hence add even more variety to the veggies we can choose from), or hydrated in minutes without taking time to wash, peel, chop and cook them.

They taste great and have no additives which makes them a great alternative to preservative packed (and nutrient weak) canned veggies as well.

If you are new to freeze dried veggies,  you can find a vegetable conversion chart here.  Price-wise, they are about the same (give or take a bit) as fresh veggies, but they don’t go bad, so there is no waste!  Plus, you can eat them all year long, even when they aren’t in season.  The great variety year round makes it easier to eat more veggies.

In the past, when I’d plan a meal, I’d start with the meat or main dish.  But lately I’ve been switching this around.  I plan our meals around a vegetable first (based on what my kids have recently chosen) and then decide what meal would work well with that vegetable.  This makes sure we are eating at least one (if not more) veggies at every meal.

I love to organize and prepare.  I love projects.  I’ve created a list of all the veggies we want to try using this fantastic Alphabet of Vegetables.  My goal is to try two new ones each week and to try each one at least 4 times (many studies say we need to be exposed to something new four times before we really know if we like it or not).

I have them all listed out and check them off as we try them.  Having an organized project / end goal  in mind has really helped with my motivation to actually eat more veggies.  It has also helped me get out of a rut of eating the same 3 veggies as  side over and over again!

How about you?  I’m still learning and would love to learn from you about eating more veggies.  What tips and tricks do you have?