How Healthy is Freeze Dried Produce?

Out with the bad and in with the good

I often mention that Thrive freeze dried fruits and vegetables are healthy.  You’ve heard me talk about how they are GMO Free, additive free and preservative free.  They don’t use artificial colors or flavors etc.

But at the recent Thrive Life convention, I learned a bit more on the topic of health from a scientist on Thrive Life’s new scientific advisory board.  That’s right: Instead of just relying on others or past research, Thrive Life is hiring scientists to specifically look into / study the food they are providing in order to learn more about the true health benefits. 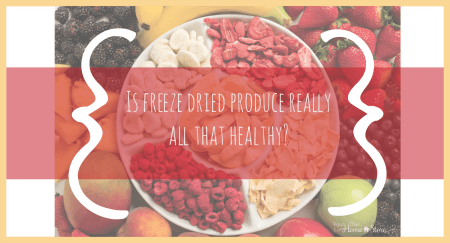 What I’ve learned has resulted in freeze dried produce being on my kid’s plates at every breakfast, lunch, snacks and dinner.

I know a lot of parents…most of my friends are parents.  And without fail, they all want to do the best they can to raise healthy children.  Many (my past self included) buy produce at the grocery store each week and then work to get it on their kids plates each meal.  And YAY for that effort!  But sadly, things don’t always work out as planned.

Sometimes we forget about that produce and it just rots away in the fridge.  Or, maybe we don’t forget, but we cook it up and lose a lot of nutrients in the process.  Or, maybe we give it to our kids raw, but our kids turn up their noses and it just gets tossed in the trash.  I’m speaking from experience here and I’m sure many of you can relate! (at least I hope I’m not the only one!)

Even if you don’t have young children at home, America is in the middle of a health craze!  We all want to eat better, have more energy and be healthier.  Yet, some of the problems I mentioned above apply to us as adults as well, right?

In addition to the issues mentioned above, unless you are picking your produce yourself, or purchasing it at a farmers market the day it’s picked, there are a few problem with the “healthy” produce you are bringing home in the first place:

So, your “healthy” produce isn’t so healthy after all!  But there is a solution: 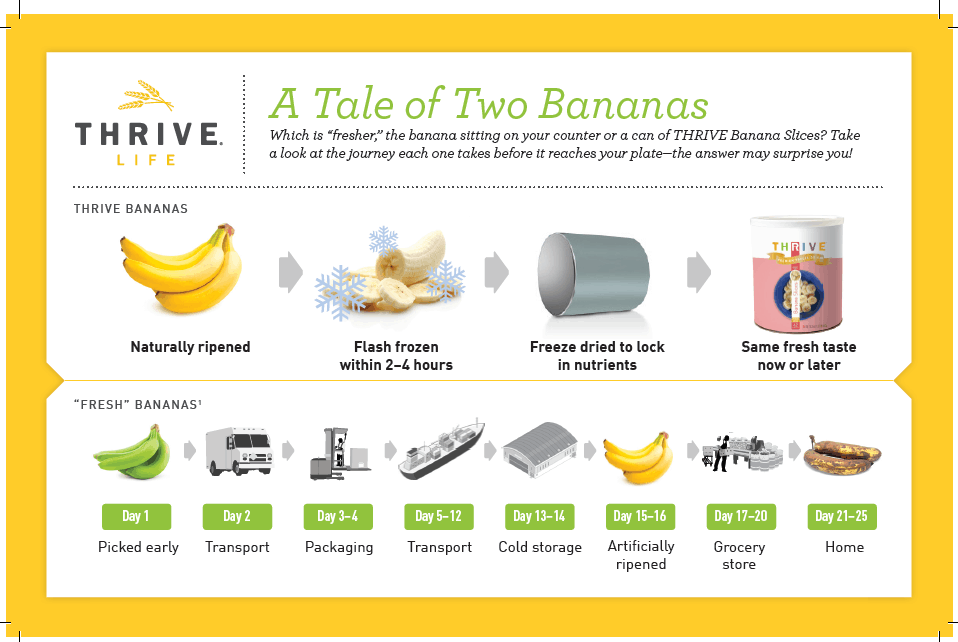 Here are a few facts you may find interesting:

And just in case you are thinking that all freeze dried produce is the same, check out this video from Angela at Food Storage and Survival.

So now you know that not only does Thrive freeze dried produce avoid all the “bad” stuff (preservatives, GMO, dyes etc), it actually has more of the good stuff.  Plus, it solves some of the other problems mentioned above:

Food rotting in the fridge

Thrive freeze dried fruits and veggies are shelf stable (no refrigeration needed) for a full year after you open the can!

Thrive freeze dried fruits and veggies are raw.  You can cook them (and I often do for soups etc), but they are also very easy to eat strait out of the can.  They aren’t like dehydrated foods that you have to chew and chew.  In fact, they are so dry, then will crumble in your had.  They are very easy for kids to eat!

My kids love Thrive freeze dried fruits and veggies.  They eat them all the time.  The flavor is much stronger than the produce from the grocery store.  My kids actually call our freeze dried produce “candy,” and they enjoy eating most of it dry (and raw).  Some of their favorites are the bananas, corn, grapes, strawberries, peaches, peas, mangoes, raspberries, bell peppers, blueberries and pineapple.  They truly are “eating the rainbow!”

You can also learn more here about the Health of Thrive Foods and watch this video of my cute friend, Amber who has eaten truly fresh produce her entire life and yet loves Thrive produce: