Wonder Oven: Save Your Emegency Fuel and Cook With Retained Heat 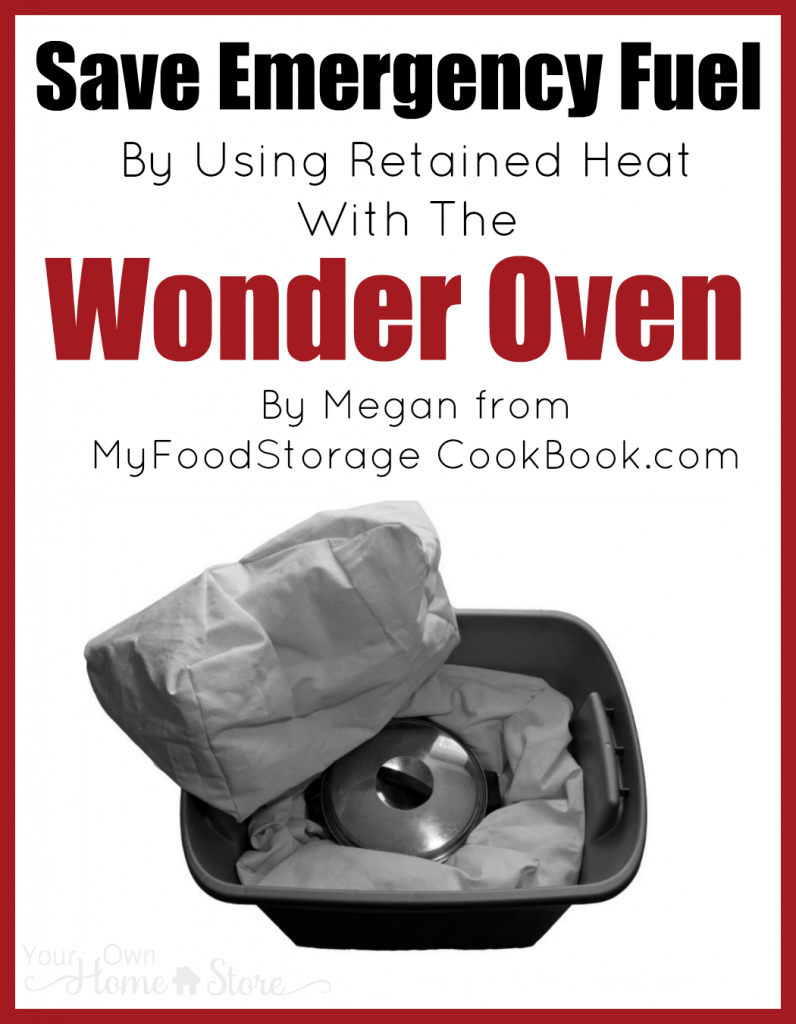 I’ve got a guest post for you today from someone I have long admired from afar.  I’ve linked to some of Megan’s recipes before and admired her site: My Food Storage Cookbook.  Recently we’ve been able to connect a bit more online and I found out she is an expert about something I know little about:  Wonder Ovens.

I’ve been intrigued by the concept of cooking with retained heat for some time.  The idea of storing enough fuel for my year’s supply of food is overwhelming.  Yet, I didn’t really understand how a Wonder Oven was different or better than a regular ol’ cooler.  Well, Megan has the answers for you (and me) today!

How To Make the Fuel Stretch?

I’m going to start off by telling you something that will probably surprise a lot of people. Five years ago, I had a lot of food storage but really no clue on how to use it or how to cook with it. It’s true! I had no clue whatsoever. I’d gathered plenty of food and, as sad as it sounds, hoped for the best. One day I got to thinking…

”Hey, wait a second…how am I going to cook these foods if there’s an emergency and we really have to eat it?”

Well, I had no idea. And to make matters worse, I had an even foggier idea for how I’d make the fuel storage stretch if we didn’t have electricity. There was just so much to think about! Whether due to a limited amount of recipes or not enough fuel, what was the use if at the end of the day we’d still not be able to have a real meal to keep us fed?

Well, I was stuck. I tried looking to expert sources for answers but never found what was needed. The simplicity to put an idea into practice wasn’t there. I needed something that was easy to use, but most importantly, effective at conserving fuel.

I ended up finding the answer I was looking for from a woman named Linda – someone I’d never met – who shared a solution that made perfect sense to the problem I was having. You can meet her here:

This idea completely changed my perspective on cooking with food storage and what is possible. It also started me on a course, following Linda’s teaching example, of teaching others about it too!

The occasion was a preparedness group meeting I attended while living in Northern California in 2010.   10-15 of us had gotten together to learn about something called “Wonder Ovens”. Linda who was visiting from out of state, learned there was a group interested in preparedness and (gratefully) volunteered to teach our class. Upon taking our seats, we noticed the demonstration table had been set with three large plastic bins. We were anxious to see what this was about.

Then, she began to teach. It wasn’t long before she opened one of the bins (it wasn’t plugged in or anything – I checked) and brought out a pot with piping hot bread inside which had unknowingly been baking within an interior container set inside the plastic bin! Everyone’s jaws dropped. This was fantastic! There was actual *steam* coming from the pot inside…how was that possible?? She went on to explain and demonstrate a hot soup she’d made, chicken and vegetables just as you’d expect to have cooked in an electric crockpot, and finally breakfast muffins. We were invited to try the foods she’d made and they were incredible in taste. Moist flavorful bread, hot muffins, tender vegetables, hot and steaming after being left in the Wonder Oven for between 8-12 hours…and without electricity!

The secret that was actually cooking the food, we learned, was retained heat. The food (or water) had been brought to boiling temperatures (using usual methods) outside of the Wonder Oven and the Wonder Oven simply worked to hold that temperature for long periods of time. This allowed for an almost “crock pot” type of cooking, only minus the fuel! But the pillows found inside the plastic bins were where the action was happening. Filled with tiny styrene beads, these pillows powerfully trapped the pots’ heat from escaping. Not only that, but this same idea worked equally well in keeping cold foods cold and frozen foods frozen. It was all about stopping whatever temperature was contained from escaping.

Spreading the Word About the Solution of Retained Heat

From that moment I knew I had to do whatever I could to get this wonderful message out. People needed to see what I’d just seen: that it was possible to cook for long periods of time with less fuel! This was especially needed for times when a non-fuel cooker (such as a Sun Oven) wasn’t an option.

Knowing what I know now, after nearly five years of food storage recipe testing, it’s not even a question. Without some kind of plan set in place to significantly save fuel needed for cooking, the fuel we have stored away will most assuredly be depleted before our food storage is used. As unfortunate as it would be, the reality is we could find ourselves with food we can’t eat… only because it can’t be prepared.

As you can imagine, an idea such as this didn’t just pop up ten or twenty years ago. From pioneer cooks to war time kitchens to modern underdeveloped countries, cooking with retained heat has allowed people to continue to cook when fuel has been in short supply. Although these devices are called by different names the idea of cooking with retained heat is the same. To me, it’s comforting to know such an idea has safely served so many generations. When questions of food safety are asked, beyond referring to my own experience, the idea has worked safely for myriads of others as well. 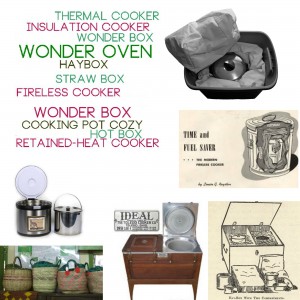 Today’s Wonder Oven (also called a Wonder Box) is merely an improvement on previous designs. Really, even a high quality cooler could (if packed with a dense material) be used similarly, as you can see with the Haybox above. The biggest consideration (an advantage the Wonder Oven has compared to other options) is minimizing air space. Whether it’s air space within the cooking pot itself or within a cooker, the result is that air space kills your ability to hold temperature. So the biggest advantage to the Wonder Oven’s design is that it’s pillows can be nested directly against the pot without air space being left between the two.

Additionally, it’s polystyrene beads are extremely lightweight (opposed to other designs), while also conveniently contained within the pillows. It’s instrument for retaining heat, these beads never need to be replaced (as with the hay in the Hay box), in fact I’ve used the same Wonder Oven pillow sets I began with five years ago. Additionally, a wonder oven has the ability to fit most any large pot (including skillets) within it, making it easy to use and easily adaptable to cooking styles. 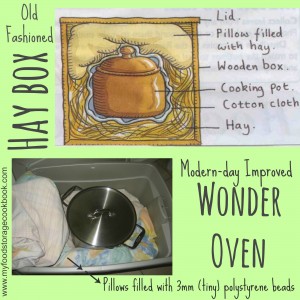 Where To Go From Here?

So you’ve been introduced to the idea of cooking with retained heat and the tremendous tool available called a Wonder Oven. This is most assuredly the very beginning of the journey to anyone who is interested in learning more. If so, please visit a post I recently wrote, an “A-Z” overview covering everything from the basics on cooking with it to how to get one for yourself: Slow Cooking With the Amazing Wonder Oven

Further, found on my own blog, you’ll find I’ve both cooked with and promoted them quite extensively. Pop over for a visit! I’d love to have you: More About the Wonder Oven

Thank you Megan for that valuable introduction to the Wonder Oven!  I highly encourage you to visit Megan’s website for more info.  She is a WEALTH of fantastic information on this topic.  Because of Megan’s influence and knowledge this is an item I have recently added to my powerless cooking supplies.  I highly encourage you to consider adding one to your supplies as well!  Megan has lots of links on her site with more info and places to purchase! 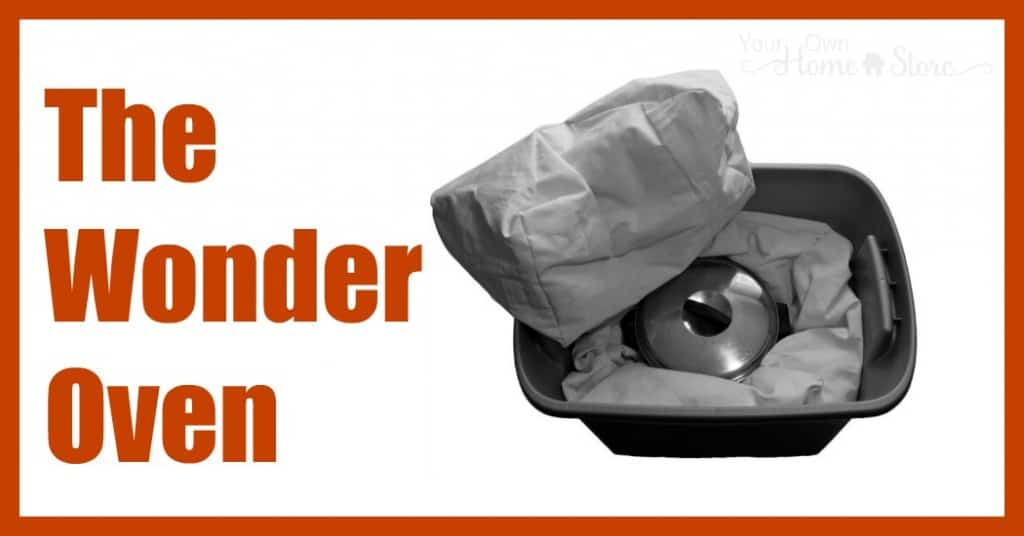