Pickling Salt: What It Is, How It Is Different, and Other Uses

Salt is one of the ingredients that we just can’t do without. While it might seem like a simple choice, this seasoning has quite a few types and varieties. One such type is pickling salt.

But before diving deep into knowing what pickling salt is, it’s good to know about the salt that we use in our regular diet.

On a nutritional level, salt is essential for our health. It helps the body to retain water and also gives us those much-needed electrolytes for normal cell and organ function.

Of course, too much salt can be harmful to us. But the right amount is necessary if we want to stay alive and healthy.

Then there’s also the role of salt in cooking; we need it for even the simplest recipes. It adds flavor, moisture, and also serves as a preservative, which makes salt necessary for making bread, cheese, etc.

The type of salt also matters. We have sea salt, kosher salt, table salt, and pickling salt to choose from. Let’s have a closer look at picking salt for now.

Pickling Salt: What Is It Really?

Pickling salt has a fine grain and a uniform structure. It’s also defined as having no iodine or additives to prevent caking. While it has gone through a bit of processing, pickling salt is still pure.

The fine grain of this type of salt is useful when we want to dissolve it in water or any other liquid. However, this same feature also means that the salt clumps easily when exposed to even a little moisture.

You might have seen and even used pickling salt if you’ve ever canned or pickled foods, whether at home or in a factory. With the easy dissolving aspect, pickling salt is the best option for brining.

You can also use it to season anything else, especially food where the salt doesn’t need to be seen. For instance, some bakers like the look of chunky sea salt on top of their chocolate tarts or cookies.

Since this kind of salt doesn’t have the iodine and anti-caking agents that are present in table salt, it won’t turn pickles dark. The same elements turn brine cloudy. So, the absence of them means that your pickled goods will likely stay fresh and clear. 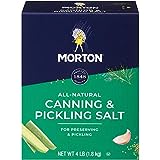 Plus, pickles made with pickling salt have a distinctive flavor and taste that you just can’t get with other types of salt. That’s why pickling salt deserves to be a part of your pantry.

One can find pickling salt in the supermarket. But it’s usually only available in bulk. It’s also a difficult ingredient to locate if you’re in a big city. If you do decide to stock up on it, you should remember that you can use it just like table salt as well.

Just remember to put some grains of raw rice in the salt shaker and jar to prevent lumping! In case your pickling salt does get lumps, you can undo them by spreading the salt on a baking tray and warming it a little in the oven.

Difference Between Pickling Salt and Other Salts

If you go into a well-stocked supermarket, the variety of salts available might be overwhelming. There’s pickling salt, kosher salt, sea salt, and table salt among a few other options.

The pure form and fine, uniform texture of pickling salt is what makes it great for preserving, canning, and pickling. However, if you don’t have pickling salt, it’s good to know how other salts stack up as alternatives:

Regular table salt has anti-caking agents, which prevent the grains from sticking together. These additives aren’t soluble in water. So, they cloud up brine or any other liquid.

The agents might not affect the final taste of your pickles but the result wouldn’t look attractive or appealing.

Kosher salt shouldn’t have anti-caking agents either but this might depend on what brand you use.

However, the grain size is different from pickling salt. So, you’ll have to adjust the pickling recipe accordingly.

Weighing the salt instead of measuring it out will be a better option. This step is important as you need just the right level of salt while making your brine.

If the salt concentration goes wrong, bad bacteria can grow inside your pickle jars and cause botulism when consumed. 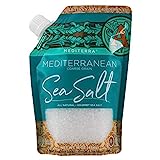 Sea salt is another type that doesn’t contain additives. However, it’s still not the right choice for a pickling salt alternative. That’s because of the vast difference in the shape and size of the salt grains.

It will be difficult to find a viable measurement. So, it’s best to avoid this option and go for kosher salt.

We’ve already mentioned some differences between pickling salt and other types. The grain size and shape do matter.

Therefore, it’s not like we can just substitute a tablespoon of one type of salt for a tablespoon of another. With the recipe for fermenting, canning, or pickling, the salt concentration isn’t something you want to mess with.

Any change can be dangerous. That’s why you should follow these safety guidelines before using any pickling salt alternatives.

How to Use Pickling Salt

Pickling veggies in your kitchen can be as much fun as starting seeds indoors. Pickling salt is an essential element of fermenting. It’s important to know how to use it in the right way.

Related Read: When to Start Seeds Indoors: The Tips and Tricks You Need to Know

Some people might choose to measure their ingredients every time they start fermenting anything. However, some experts would recommend simply eyeballing it and tasting it as you go. This would require a certain level of experience, though.

You should learn how to use pickling salt in the best way especially if you’re using it for the first time. Let’s have a look at the different methods now.

This involves sprinkling salt on your cabbage to draw out its moisture and make the brine. The brine is where the cabbage will sour and ferment without rotting.

The salt will also keep the pickled cabbage crunchy. The usual measurement is three tablespoons of pickling salt to five pounds of cabbage. It might be better to use more salt if you’re pickling in the summer.

Adjust according to the brine

Different vegetables and fruits have different water contents. Some produce will release more water than others. That’s why you might get varying amounts of brine.

Also, freshly picked items will probably have more water than the ones that have been stored for some time.

Topping off with water

Many of the items you ferment might need topping off with a bit more water than they release.

If you feel that’s the case, you should first add salt to the produce for up to 24 hours (minimum 8), and then, top off with water. But if you use more water, you’ll want to use a little more salt as well.

How to Pickle Cucumbers with Pickling Salt

Pickling cucumbers aren’t a separate variety but they consist of several types that work for pickling. They have less bitter skin and their seeds are also smaller and fewer.

You also want to avoid cucumbers from the grocery store as they’re usually covered in food-grade wax. This creates a barrier between the pickling spice and the cucumber.

Don’t go for salad cucumbers or any cucumbers that are damaged, rotted, or bruised. Once you have a selection of perfect cucumbers, remove the stem and blossom.

Then, cut a sixteenth of an inch from the blossom end. This will release the enzymes that will soften up your cucumber.

Next, wash the cucumbers properly in cool water and scrub to remove any sand or dirt. Cut the cucumbers into quarter-inch slices, and put them in a non-reactive boil. Cover the cucumber with hot, boiling water but don’t put the lid on.

Let the cucumbers sit there until the next day. Drain them without rinsing and cover up with more boiling water plus some pickling salt mixture. The mixture can be around 1.5 cups of salt to a gallon of boiling water.

The next day, drain the water mixture and cover it with a mixture of alum and boiling water. Approximately 2.5 tablespoons of alum in a gallon of water will be fine here.

Now, boil some pickling spices and cider vinegar. Use this concoction to cover the drained slices. You can pour this over the cucumbers.

After three days, drain off the cider vinegar and throw away the spices and vinegar. Your pickled cucumbers should be ready to try.

How to Pickle Spices with Pickling Salt

When you intend to pickle spices, make sure to use the fresh kind. These can be ground, crushed, or used whole. Avoid the spices that you’ve been storing away for over a year. You’d need fresh spices like young ginger, vinegar, sugar, salt, and water for this routine.

Sterilize your jars first while making sure to only use stainless steel or glass options.

Peel and slice the spices if their structure allows it, and then, put salt on them. After five minutes, pour some boiling water on them and let them sit for two more minutes.

Next, drain the water and squeeze the excess from the spice. While the whole thing is draining, prepare your pickling liquid with the pickling salt and pour it on top. Seal it up and allow the jar to cool outside for half an hour before it goes in the fridge.

Other Uses of Pickling Salt

We’ve covered how pickling salt is great for canning, brining, preserving, fermenting, and so on.

However, it does have a lot of other uses just like regular salt. You can sprinkle it on all kinds of food. But you should keep the fine texture in mind.

If you’re pouring this kind of salt into foods, it will flow easily and might ruin your recipe. That’s why you should use pickling salt according to your taste preferences.

If you do want to season any kind of food with pickling salt, it’s best to sprinkle it. Putting them in a salt shaker might not be the best idea, as the pickling salt tends to lump or flow too freely.

When you want the perfectly seasoned fries, however, toss them with the pickling salt when they’re still hot. You can also wash potatoes, roll them in pickling salt, and then, put them in the oven for baking.

The quick-dissolving nature also makes it perfect for use in soups. Start with a tiny amount and work your way up to perfect the taste.

Finally, you might try using this salt for pickling several kinds of items. These include beets, beans, onions, peaches, tomatoes, lemons, cauliflower, cucumbers, peppers, and even watermelon rinds!

Time to Sprinkle Some Pickling Salt!

We’re all caught up on pickling salt now. So, let’s think of where and how to use it in the future. Even if you don’t ferment things regularly, having some on hand can be quite useful.

Use it to season your meals and snacks, or just have it on standby when you feel like experimenting.

As long as you prevent lumps, pickling salt can easily replace the less pure salts in your life. You might even find the change more appetizing. So, grab a box or bag and start using pickling salt as soon as possible.

Do you have any other uses for pickling salt? Share your tips in the comments.